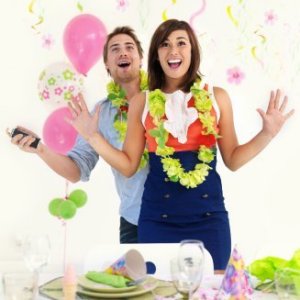 Any party can be difficult to plan, but surprise parties add an extra level of stress as you must conceal the entire event from the guest of honour. With that in mind, it is important that a surprise party is planned with a meticulous level of detail, in order to ensure that everything goes without a hitch and the main guest stays surprised. Here is a quick primer on throwing a surprise party and keeping it secret, to ensure everything goes down without a hitch.

1.   Have a fake event planned to fool the guest of honour

To ensure the guest of honour does not make other plans, it is crucial that you invent a fake plan to fool the person in question. Do not pretend that you have ‘forgotten’ their birthday, or make other lame excuses. If you love someone, they will know you would not really forget their birthday and it could set off ‘surprise party’ alarm bells. Instead, set up a fake smaller plan—tell them you are going to a restaurant instead. Just in case, actually make the reservations—just in case the person rings up to check.

2.   Make sure the guests know it is a surprise party (and what time to arrive)

Odds are that the person most likely to let slip about a surprise party is one of the guests, usually because they do not know it a surprise. It is therefore incredibly important to make clear to everyone that it is a surprise party, and swear them to secrecy. It is probably a good idea not to send out invites, as the guest of honour may visit a guest’s house and see the invite lying around. In this day and age, your best bet is technology. Set up a secret Facebook event or send around an email. If there are older people who aren’t web-wise invited, then give them a call. If you need to ring someone up to consult about a chocolate cake recipe or ordering banners, double-check to ensure the guest of honour is not within hearing distance.

It is also crucial to ensure that everybody is at the location before you and the guest of honour arrive. There is nothing so annoying as to have kept the secret all the way until the door of the venue, when a guest tries to enter at the same time as you—or a guest is outside smoking. The inevitable ‘What are you doing here?’ conversation will set off alarm bells.

This may sound incredibly obvious, but don’t leave your party plans lying around. Ensure that any hired help like caterers or the venue only have your mobile phone number and not your home number (just in case the guest of honour answers). In addition, try have an excuse when you go out for a party related errand. Disappear too much and the guest of honour might start having some questions.

4.   Have a foolproof plan to get the guest of honour to the party location

If you are not having the surprise party at home, coming up with an excuse to get the guest of honour to the location can be tricky. The first step is not to arrange to meet them there: the guest of honour could be early, late or even cancel if you are not there to supervise. Secondly, and related to step one, make the location of the real event work with your ‘fake plans’. If you are having the party in a restaurant, tell them you are going there for a meal. If you are having it in a pub or club, say you are stopping there for a few drinks. When you get to the ‘travelling to the party’ stage, you are incredibly close to pulling off the surprise—don’t ruin it in those last few minutes.

5.   Have a point person at the event

Arrange to have a guest at the event be your point person, so that they know when you and the guest of honour are about to arrive. That way, they can ensure all the guests are inside (not outside, having a smoke and giving the game away) and that everybody is ready to yell surprise at the right moment.

There are so many variables in party planning, and there are so many unpreventable ways in which the guest of honour could find out about the party. As long as you try you best, chances are that you will get lucky and the party will go as planned. Good luck!

This is a guest post by Lilly Sheperd, a freelance writer who shares her creative ideas on various blogs.