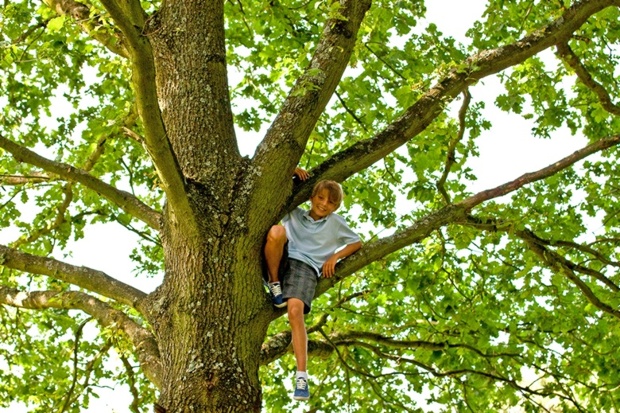 Today’s parents’ refusal to let children take risks is harming their health and competence. This was the damning conclusion this week of the all-party parliamentary group on a fit and healthy childhood. The report found that our disproportionate fear of danger is consigning our kids to a restrictive, indoor existence that will prevent them from growing into resilient, self-reliant adults. What children need, said the MPs and experts, is “Risky play involving perhaps rough and tumble, height, speed, playing near potentially dangerous elements such as water, cliffs, and exploring alone with the possibility of getting lost.” While cliff-play might be too close to the edge for most of us, here are some other skills and experiential thrills children should try.

Light a fire
Lisa Fenton, co-founder of Woodsmoke bushcraft school, has taught seven-year-olds to build a fire and believes that even young children can be trusted, if carefully taught and supervised. “If you’re with them, they learn the values and personal qualities required for the responsibility. Then making fire is not an unthinking experiment, it’s a challenge.”

“Children, especially boys, want to play with fire because they’re fascinated with the forbidden, and they need to play with fire, as a rite of passage, as proof that they’re no longer frightened of what used to frighten them,” says Elizabeth Hartley Brewer, child development specialist and author of Talking To Tweenies: Getting it Right Before it Gets Rocky with Your 8-12-Year-Old (Hodder). “Children need to be introduced to managing fire sensibly and safely.”

Hartley-Brewer recommends that as part of growing up, it’s advisable for those aged eight and above to be involved in the family bonfires, family barbecues and lighting candles, because it means that they feel trusted with fire. “Children need to have enough experiences of fire at the appropriate age, to experiment, even in the garden, to burn different leaves, paper and cardboard, just to see how the flames creep. It satisfies their curiosity, and it means that they won’t go out and find out about it in far more dangerous circumstances with no adults anywhere near.”

Use a sharp knife
“In past generations, boys would grow up using pocket knives and penknives,” says Hartley-Brewer. “Boys, more than girls, love to use a penknife to whittle sticks. It absolutely used to be a common part of boys’ development.

“From around the age of eight, children’s eye-hand co-ordination and their ability to control their finer motor movements jumps forward a step. [Using a knife] certainly shouldn’t be left any later than that. They can feel proud of their competence, and their sense and reliability. Kids are potentially growing up now with a much reduced sense of their own competence. They spend so much time with their nose in their homework, or hands on their devices, they’re not actually learning the fundamental skills for managing in life.”

Children learn, says Lisa Fenton, from their elders, their peers, then independently. You need to show, tell, do. Competence with a knife, she says, is about a child “bodily learning: how to position the knife relative to your fingers, always cutting away from yourself, and never putting any part of your body in front of the blade edge.”

Let teenagers go too fast
A group of 15-year olds whizzing down a steep road on skateboards or bikes seems like madness, but they need to scare themselves (and us). “Speed is important,” says the counsellor Janey Downshire, co-author with Naella Grew of Teenagers Translated. “It’s only by pushing themselves out of their comfort zone that teenagers find their limits. They need to experience the feeling of ‘Wo-oh! that was really scary, I nearly..!’ to establish that boundary for themselves, for their brain to log it.”

She adds, “The teenage brain kicks out a massive amount of dopamine, which means adolescents gravitate towards thrilling, arousal-seeking sensations — it prepares them for life outside the confines of home.” But because the modern message is you’re safer at home, they’re taking sedentary risks: sexting, inappropriate gaming, looking at pornography. That gives the same sense of risk-taking, but because it isn’t physical, they’re not learning where the boundary is.”

Climb tall trees
Children are programmed to seek the danger and excitement of tree climbing, says the psychologist Jo Schofield — co-author of The Wild Weather Book with Fiona Danks — because only through experience can they determine what is safe and what isn’t.

Tree-climbing ability — as with many skills — depends on “risk exposure” rather than age. Jo recalls taking children to the woods, who’d been told “that’s dangerous” so often, they no longer believed it. “One said, ‘I’m going to climb that tree.’ I said, ‘That one’s got a broken branch. You’ll fall, but it’s soft underneath, you’ll be okay.’ He climbed it, the branch broke, he fell.”

“He looked at me and thought, oh, she was telling the truth. Kids need to be out there, working it out themselves. That way, they learn, through play. They take control of the fear — and they love it.”

Make a journey alone
Children need to start “roaming” at a young age, says Natalie Johnson of The Wild Network. “Start small, start local,” she advises. “It’s that everyday bit of wildness that children need; playing on rough ground that’s not a park, local grassland.” As trust and common sense improves, “let them go and kick stones in a bit of wasteland, even for half an hour — they need that feeling of exploring.” In one generation, she says, roaming distance from home has halved. “It’s not just stranger-danger, it’s busy roads and too many after-school clubs.”

Walk them to school or the bakery, then when the route is familiar, “let your kids buy a loaf from the shop. If there are no roads to cross, and it’s close, some children are capable at eight.”
thewildnetwork.com

Swim in the sea
“The sea will always be dangerous ,” says Jo Schofield, “but body boarding, surfing or even jumping the waves is so exciting and exhilarating, all children should enjoy it.”

This is not the same, however, as “just letting your child go off and jump waves” – which would be lazy and irresponsible. “First, teach your child to be a competent swimmer, then find out about the place you plan to swim. Look into tides, currents, then go swimming with your children first to check out they can handle it. Once you know the risks, and that your child has the skill needed to cope, then you’ll be comfortable enough to sit on the beach keeping an eye on them.”