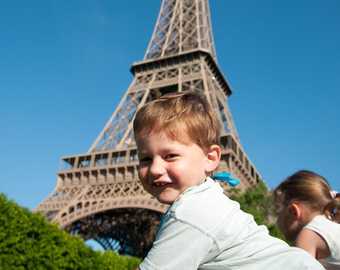 France is a country famous for its rich history, great wine and cheese, sunny southern climes and fabulous snowy winters in the Alps, along with some of the world’s top-notch restaurants, a famously laissez-faire attitude, and lashings of sang-froid. It also just happens to be a great destination for family holidays, and even if there are young kids and even babies in your party you’ll find it a breeze to cater for their physical and recreational needs and demands. With car hire in France so accessible, it’s easy to get the most out of a visit to this remarkably varied and beautiful country without all the hassle of using public transport with kids and all their paraphernalia in tow.

In France you get a complete package that might require you crossing several borders in some other parts of the world. Here, you get fabulous sandy beaches, majestic mountains, gently rolling countryside, huge historic cities and pretty little villages all in the same country. In fact it’s sometimes puzzling as to why the French ever bother travelling abroad, when they have it all right there on their doorsteps at home.

The French are very good at catering for small children, in a way that can make England, for example, look as if it’s still back in the Dickensian days of underage chimney sweeps in the Big Smog and matchstick girls in Covent Garden. For example, don’t be surprised when standing in an agonisingly long queue outside somewhere like the Musee d’Orsay with a small, bored kid to be suddenly ushered to the front by a smiling official and treated like a VIP. Just look at the catatonic lines of hopeful visitors around London’s Madame Tussaud’s on any day of the week and you’ll see what a blessing this Gallic charm can be when they aren’t overdoing it.

There are well run crèches in many of resorts in the French Alps, so that’s something to research if you’re interested in a family skiing holiday. Most resorts also run special events for young children to keep them occupied while you’re enjoying a drink or practicing your freestyle techniques on the slopes.

Also, if you fancy abandoning the hire car for a day or two, the French rail system is superlatively clean, efficient and reasonably priced, so you could for example get there comfortably from anywhere in mainland Europe rather than having to fly – notoriously difficult if you’re travelling with youngsters.

If you’re looking for a beach holiday in France, head for the Atlantic Coast resorts rather than the expensive Cote d’Azur. As well as being cheaper, you’ll find fewer crowds and a lot more space for the kids to play on their own, and the beaches are much better quality as well as being bigger.

As France is on mainland Europe it’s also easy to nip across the border into Spain, for example, or hop on a train to neighbouring Holland for a bit of variety. Hire a car in France and you’ll be pleasantly surprised at the world of opportunities that opens up for you and your family there.

David Elliott is a freelance writer who loves to travel, especially in Europe and Turkey. He’s spent most of his adult life in a state of restless excitement but recently decided to settle in North London. He gets away whenever he can to immerse himself in foreign cultures and lap up the history of great cities.