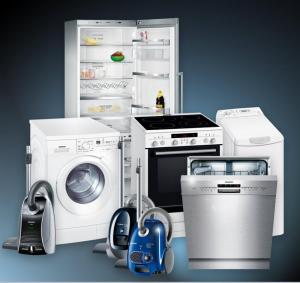 Take a minute to think about just how many electricals you used before you stepped out of the house this morning. Perhaps you were woken by an alarm clock, put the kettle on for a cuppa, warmed your porridge in the microwave, used a hair dryer or straighteners to tame your mane and then unlocked your car with a key fob.

With that in mind, here are the top five electricals you simply can’t live without in modern society.

Despite all the new electricals in your life, the refrigerator is one of the absolute musts for anyone. Whether you’re just getting the milk out for a cup of tea or butter for your toast, you use the fridge to keep things cool and fresh. Without it, you would have to go shopping almost every single day.

If you thought the laundry was a chore these days, just imagine if you still had to beat your t-shirts against a stone and use animal fat as soap. Although that practice dates back to Roman times, people were still using scrubbing boards in the 60s. The way we wash clothes has changed drastically thanks to modern washing machines and new features make them even more beneficial than before.

These days you spend hours and hours tapping away on computers, which make it strange to think that they’re actually a relatively new invention when compared to other electrical on the list. Whether it’s at work or at home, since the Apple II was launched in the late 70s, the computer has definitely become a household staple, and one we would all struggle to live without.

Your great grandparents probably remember listening to the news on the wireless. The last century has seen a huge change in the way we receive entertainment. Radio is still around of course, but it has gone digital.

Another important electrical item to undergo the same treatment is the television. There are thought to be over 1.5 billion TV sets in the world today and with the digital switchover and internet-enabled smart TVs both recent developments, it’s clear that this is one electrical item that is here to stay.

Who would have thought the humble telephone, designed by Alexander Graham Bell would have turned into something you can’t live without? In recent years, the UK has become a nation addicted to smartphones and they can be used for just about everything these days.

From sending a tweet to your favourite celebrity to controlling the lights in the house, mobile phones have revolutionised the way people communicate – especially when you think about smartphone models.

Getting your must-have gadgets

For any household without these items, stocking up is important. The price of electrical appliances and gadgets varies significantly depending on what you’re buying and where you’re getting it from, so it’s important you find the best deal. Shop with The Co-operative Electrical to ensure you’re getting great deals as well as the very latest technology.