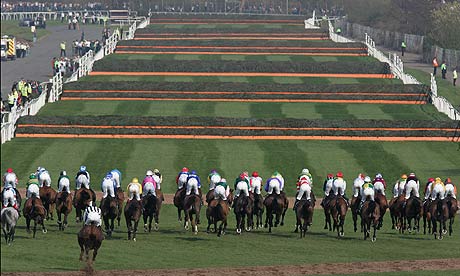 This year, on Saturday 5 April, more than 600 million people around the world will watch one of the most challenging steeplechase horse races in the racing calendar live on TV – the Grand National at Aintree in Liverpool.

Even people who have no real interest in horse racing find themselves placing a bet on the Grand National; in the same way that everyone gets behind one of the players in the Wimbledon Tennis final even if they don’t really follow the game of tennis.

People who know a bit about racing will probably have already chosen their Grand National horses at antepost prices on betting exchanges like Betfair. Of course, some of those horses won’t actually make it to being under starter’s orders on race day, but that’s part of the fun (and risk) of taking an early bet. You get better odds, but come race day, your horse may not be taking part. This year, 115 entries were made for the 2014 Grand National, and the field is then reduced over two declaration stages. When the race begins, the field will be a maximum of 40, and these will be the top-weighted horses as the Grand National is a handicap race.

As race day draws nearer, the odds that you can get on sites like Betfair shorten as it becomes clearer which horses are still potentially in the race. The current favourite on Betfair is TeaforThree at 10/1, followed by Long Run at 14/1 and Monbeg Dude and Tidal Bay at 16/1.

Even if you don’t actually have a bet, it’s good fun to get a crowd of friends round to watch the National with. You can all choose a horse to root for and enjoy the race together. Letting the kids choose their favourite horse’s name is always fun, and just wait for the look on their faces if ‘their’ horse wins.